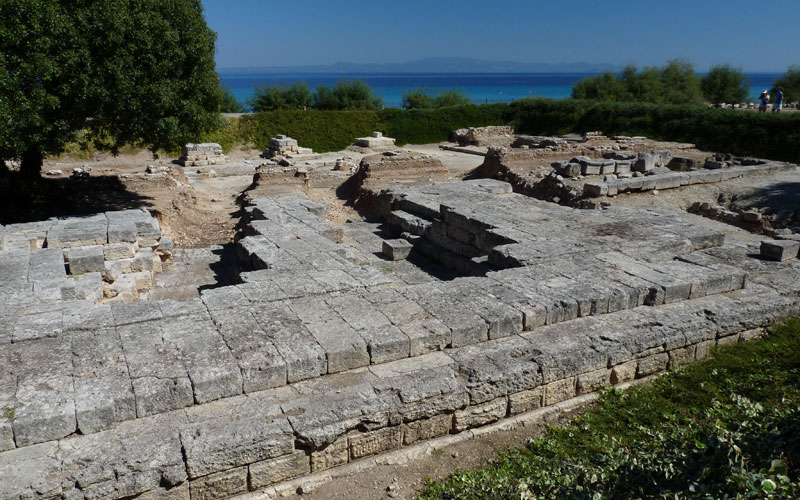 The three sanctuaries of Afitos

The peaceful view east across the sea to the middle peninsula of Halkidiki in Northern Greece has always been the same from Afitos. More than 5000 years of human habitatition and the locals have always woken up to the same sunrise over the same mountains of Sithonia, the same mesmerizing blue and green water gently washing up on the same white sandy beach of todays Kallithea. The beauty that attracts thousands of tourists each year has always been here, just the names have changed.

What is known as the Kassandra peninsula today, in ancient times was called Pallene, before this Phlegra. This place saw the likes of the Greeks, Macedonians, the Romans and others. Famous men stood here, wrote about her, even tried to build their empire here. Some of those names are familiar from our history books like Aristotle, Alexander the Great, Cassander, Strabo, Thucydides, even Greek mythology had to have it’s mention of Phlegra. “So what’s the deal with these ruins?” you may ask. Mind the pun, but lets dig a little deeper to get a peek into Kassandra’s premier attraction. Aphytis (today Afitos) has been settled continuously for at least 5000 years. From the 8th c. BC it was known for its sanctuary of Dionysus. Dionysus was semi-divine, the son of Zeus and a mortal – Semele. He was popular, attractive and being the black sheep of the family of gods, he was probably the most interesting. Being the god of wine, fertility, theatre, and a bunch of other things we are not going to mention, let’s just say he was all about letting your hair down and having fun. Such was the context of Afitos with it’s sanctuary of Dionysus. In the months of March/April, as the grape leaves started to appear, people would gather here for the festivities as they did in other sanctuaries of Dionysus. Besides the emphasis on over drinking, this is also where plays would be performed and people gathered for entertainment. Part of the sanctuary has a cave that was used in the worship of Dionysos and the nymphs. Part of the rituals would have them descend into the cave in symbol of Dionysus descending into the underworld. From the Greeks, this god was recognized to the ancient Romans as the god Bacchus.

By 403 BC, Lysander of Sparta beseiged Aphytis. He had just finished the Peloponnesian War that gave Sparta dominance over Greece. He claims to have been visited by Ammon in a dream and told that it would be better for him to stop his seige of Afitos, which he did. He then instructed the Aphytians to built a sanctuary to Zeus Ammon. Within a few years coins were being minted in Afitos with the head of Zeus Ammon. The locals worshipped this god with zeal and by the second half of the 4th c. BC, the temple was built by the Macedonians. Amun (Ammon) was, according to the Egyptians, the king of the gods and patron god of Thebes from the 20th c. B.C. Amun was the focal point of Egyptian worship and when he was combined with other gods such as the sun (Ra) he become Amun Ra. The Greeks had their own king god – Zeus. When the Greeks colonized north Africa in the 6th c. B.C., the city Cyrene (now in Libya) worshipped Zeus Ammon since they understood Ammon to be the equivelent of Zeus.

East of Cyrene, in the oasis of Siwah in the desert (now in present day Egypt and bordering on Libya), there was an oracle of Zeus Ammon famed among the Greeks. This was the connection that brought Zeus Ammon to Greece . Temples to Zeus Ammon were eventually etablished in Thebes, Sparta and elsewhere so when Lysander beseiged Aphytis in 403 B.C. he was already familiar with the worship of Ammon. 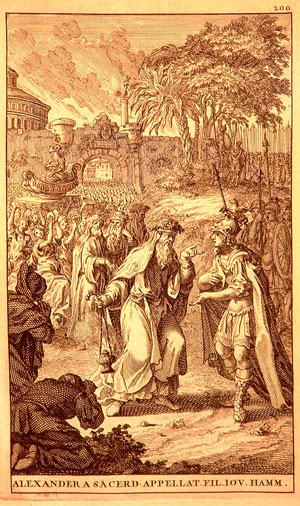 The oracle in Libya was well respected in Greece. It was 3rd in importance only after the sanctuary of Zeus in Olympia and in Dodona in Epirus. After having been defeated in Asia Minor and Egypt, Darius the king of Persia was on the run. While in Egypt in 331 BC, Alexander took steps to make himself a living god. Tradition has it that Alexander went to the oracle in Siwah and there he was told that he was the son of Zeus Ammon. It is possible that Alexander had also visited the temple in Aphytis since it was close to his home. Arrian of Nicomedia wrote how Alexander wanted to travel to the oracle in Siwa to imitate his ancestors Heracles and Perseus who had travelled there before him.

The ruins that remain of the temple in Afitos are that of the Temenid (later Argead) Macedonian style. It’s not known exactly who constructed the temple, but it is estimated to have been built by the second half of the 4th c. B.C. This temple completed a work that was begun after Lysander gave his orders to the Aphytians for a cult to be set up to Zeus Ammon. Three kings of the Argead dynasty reigned during the last half of the 4th c. B.C – Philip ll, Alexander the Great, and Cassander by marriage. One of the latter two are more probable to have built this temple. 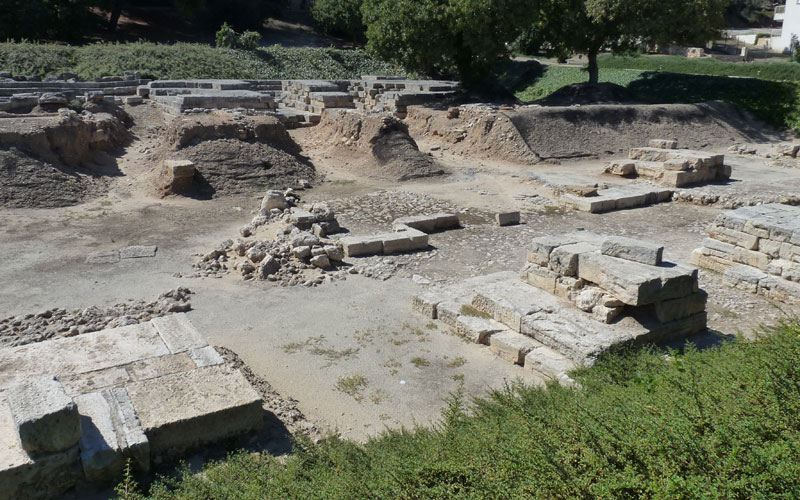 The third god worshipped at this site was Asclepius, god of healing. Like Dionysus, Asclepius was a semi-god, the son of Apollo and a human woman – Coronis. In connection with such sanctuaries, water or mineral baths played a big role as was the case in Afitos. 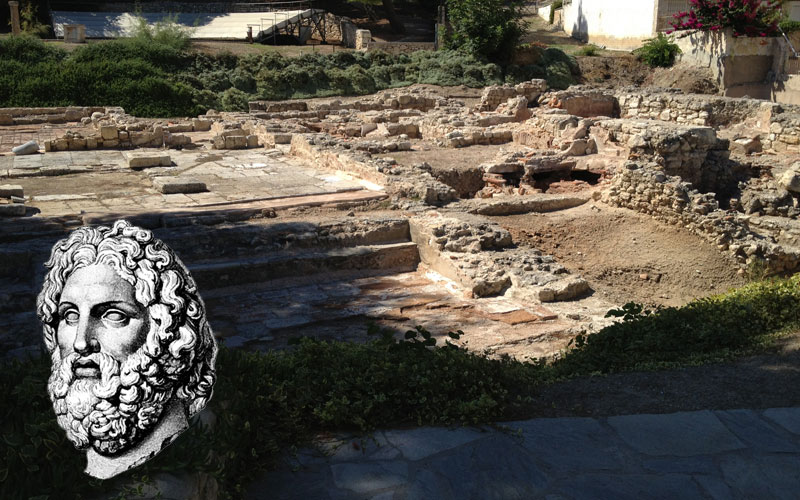 Written sources say that this cult existed in Aphytis by 360 BC but there is evidence that Asclepius was worshipped here even earlier. In 242 BC the Panhellenic Festival of Asclepius was held on Kos and Cassandreia (the main city of the time on Kassandra) participated giving evidence of there being a sanctuary to Asclepius on this site. 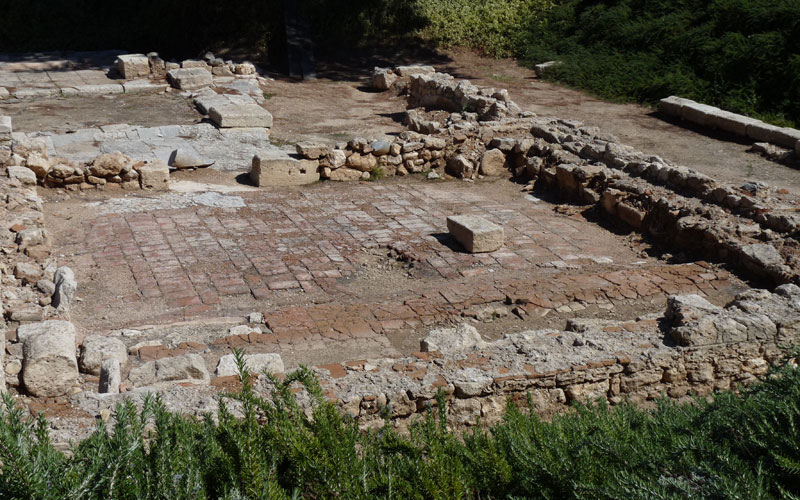 The area of Afitos sits in an earthquake zone and has seen a lot of seismic activity. The buildings and temples were damaged over the years and consequently repaired as was the case in the 2nd c. AD. By the 4th c. AD all three sanctuaries had completely been abandoned.